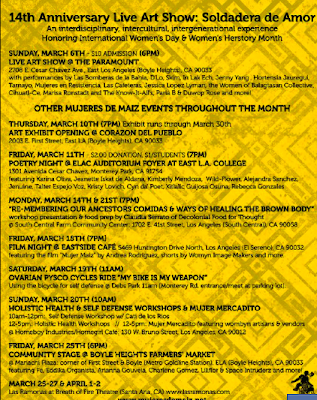 brazilian guys in hostel were loud sleepers. snoring bastards woke me up once or twice. i had packed my suitcase real tight, so no one would mess with it. just to be safe and not sorry. i had a long day but the brazilians left to party. it was about midnight. i scribbled some more and then went downstairs and spoke with a different guy from brazil, curitiba to be exact. i asked him about the famous fighters from his city. he was surprised that i knew about his city’s reputation, since i had never been there.
END_OF_DOCUMENT_TOKEN_TO_BE_REPLACED

So there I was, about to eat my veggie torta from Chapalita, when all of a sudden this happens. The yearly celebration in honor of Cuauhtemoc was going on today, these dancers were headed to his statue by Lincoln Park. By the time I got there it was all over cuz nobody was there.

Only on the Eastside.

“But what about the torta?” I hear you asking. Well here it is:

The world’s most notorious street artist and visual prankster, Banksy, who is in town for the Oscars (his film Exit Through the Gift Shop is nominated for Best Documentary) made it east of the river to leave the residents of Boyle Heights a small visual gift for us to enjoy. It seems he is much more clued in to local politics than I thought and he is aware no doubt, that this piece might bring some attention to the plight of undocumented immigrants. Perhaps all those Oscar folks and celebrity gossipers will be forced to talk about something slightly political for once.

There’s no need to keep the location secret as the word is spreading rapidly. Plus the piece is totally visible from the street. It’s in the alley on the southwest corner of 1st and Soto. When I was there this afternoon, there was no one around and no one taking photos. There is however a film crew shooting a new movie about J Edgar Hoover right around the corner.

Bienvenido to the Eastside, Banksy!

*Rumor has it that there are more of these stencils around Boyle Heights like for instance, on Pleasant and Cesar Chavez near the bridge.

UPDATE 2/25/11: Such ridiculousness, it makes me LOL, I tell ya. The Banksy piece got tagged by someone who rolled up in car, sprayed over it and took off. Then, the owners of the building came by and cut it out the wall! Ah, the art world!
H/T to Melrose + Farifax, check the site for photos.

Video (including the piece on the bridge near Pleasant) by Jessica2Cents of Mis Neighbors here.

According to one of our Facebook readers, the second Caution piece on Pleasant has been tagged by a “$” sign but it’s still there.

Today, Evonne Gallardo, Executive Director and the Board of Directors of Self Help Graphics & Art announced that the 40 year old institution of culture and art in East Los Angeles is moving to a new home.

Relocation from the icon building decorated in tile by artist Eduardo Oropeza, has been a buzz on the eastside for a while now—but negotiations as to where to move and being forward-facing, have been long, arduous and thorough.
END_OF_DOCUMENT_TOKEN_TO_BE_REPLACED

When your daily intake of calories is defined via a “combo number” then it’s probably a good time to contemplate other options. Maybe food with a name?

I don’t get the appeal of fast food, other than the fact that it is cheap and easy, although maybe that is enough of a draw. But what a wasted opportunity to try something interesting instead. I know Eastsiders like their fast food or else these places would go out of business. I’m interested in learning though, so let me ask you this:

Why do you frequent fast food places? Is it the price? The convenience? Lack of other local options? This metiche would like to know.

For as long as I can remember I’ve always been interested in global street dance styles: dance moves and trends started by small groups of folks in their respective geographic areas. Over at my chimatli blog I’ve posted lots of DIY Youtube videos of various urban styles like Kurdish Halay/Govend hip-hop, Duranguense, Tecktonik, Kuduro and Jerkin, to name of few. In this tradition, I was pleased to come across these videos of a new music style and scene coming out of Texas called Tribal which mixes Banda/Cumbia with Techno. While the music is pretty straightforward, it basically sounds like a good mixture of the two music genres, it’s the fashion that goes with this scene that’s pretty remarkable – namely, the boots. These aren’t any old kind of botas, these are the kinda boots that would make an Aladin genie or a fanciful fairy proud. The tip of the boots are long, pointy and exaggerated, so much so that I wonder how they are able to walk in them as the point stretches out sometimes two feet in front of their shoe. “How do they climb stairs?” a friend wondered. Frequently the boots are decorated in a mega-Ed Hardy style, bedazzled and often shocking pink or leopard print.

In 2008, a few of us took an illegal trip to Cuba for the Decimotercero Festival Internacional de la Poesia, a plein air annual poetry festival in Havana, Cuba. I say â€œillegalâ€ because the US Presidents George grande y el chico, were sticking to the strict rule of penalizing US citizens [who traveled to Cuba without permission] with a $10,000 fine.

At that point many artist and musician friends had been going back and forth all this time, to visit and attend the historically rich music, art and cultural events sponsored by the Cuban government. Their stories made me salivate with desire to follow their footsteps. After all, we are not people to be held back from where we want to go, because of some ridiculous rules and regulations.

When some local eastside poets got invited to go to this poetry festival in 2008—I latched my wagon onto theirs. Calls were made to the Cuban festival organizers from Tijuana about accommodations, schedules, side cultural trips, todo—and we were all set. Hopping over, on one of Mexicoâ€™s daily flights to Cuba still had its risks, because the US could request Mexicoâ€™s flight manifestos where our names would be listed and we would be so busted. Ni modo.

I wanted to see Cuba before Castro died, before it changed into another commercial beach resort dotted with European style hotels. It could happen! So here are my photos. Photos I was too afraid to share with you on LAeastside in 2008â€”because I did not want to be caught for doing this supposedly un-American thing. My courage comes from Obama easing the penalties on Americans traveling to Cuba a few weeks ago and legitimate flights being organized for non-profits to go to Cuba from the USA on cultural exchanges. Yay!
END_OF_DOCUMENT_TOKEN_TO_BE_REPLACED

Did you enjoy your Valentine’s Day (“Valentimes” for you Eastsiders) and it’s artifice of love represented by cheap, corn-syrup chocolates, industrially grown, pesticide-laden flowers and eco-destroying mylar balloons? Many think the key to love is a mystery but the real mystery in my opinion is, how do they get those teddy bears in balloons?

Read below for info on awesome book readings, the cranky city attorney, lost casas, dedications (not the Art Laboe kind) and the requisite Eastside fundraiser.
END_OF_DOCUMENT_TOKEN_TO_BE_REPLACED

This Saturday come to Corazon del Pueblo and pick up on some useful skills for your bike, such as basic maintenance and mechanics. Presented by Bici Digna, this workshop will help riders both new and experienced familiarize themselves with some of the basic steps to maintain a working and safe bike. This includes things like being able to adjust your brakes, gears, wheels, tires, how to fix a flat etc. For most experienced rides, skills like these are biking common sense, but as more and more riders are taking to the streets, there are those who may be intimidated and unfamiliar with the workings of their bikes. I know a few people who still haven’t grasped how to fix flat tires and it’s ok, we all gotta start some where right ? This will be the first of what will hopefully be one of many workshops on bike mechanics and how to ride on the streets safely that Bici Digna and City of Lights will be coordinating in the East Side.