I had my communist meeting today, of all days Dia de los Reyes, a day that in the Latino/a community is spent with family to close the holiday celebrations and to enjoy some rosca and chocolate. I didn’t know what time I would get home from my meeting and I didn’t want to miss out on the rosca. Good thing my friend called me last night and suggested I take one to the meeting, we would go half’ers on it. So as I make my way toward the Pavo Bakery on Chavez and Soto I notice that there is a small pile of nothing but roscas sitting on the counter. I look with amazement at their size as the aroma of freshly baked roscas charms me into hunger. At $6.50, I knew a small one would suffice for our meeting considering there won’t be that many of use there. A medium one cost $20 and it’s WAY too big. Too much rosca.

I asked the lady for a small one and she ever so kindly went to the back to look for one. When she came back she told the other ladies at the register that there are only three small rosca left and the other two are reserved. “Should I make sure that the one rosca isn’t reserved for anyone” she exclaimed in spanish. “Si” replied one of the other women. She went to the back and looked again. She told them again that it was in fact the last one and that it didn’t have a name on it. She went to the back one more time and brought the rosca to the counter. A lady next to me quickly looks at the rosca and ask that woman at the counter if she had any more small roscas, “no. That’s the very last one” she said in spanish. We both had a little laugh about me having the last one, I paid and thanked the women at the register. I took the bus to my meeting, said hi to everyone and shared the rosca with them. They loved it.

We used my friends pocket knife, which she previously used to cut aguacate, and tore into that rosca. She was the one to get the baby and I told her it’s an omen. “So does that mean I have to host the party on Feb 2 ?” she asked. “No. I means you’re gonna have a baby” I said. She looks at me with contempt and annoyed and says, “Yeah, like that’ll happen.” True story. 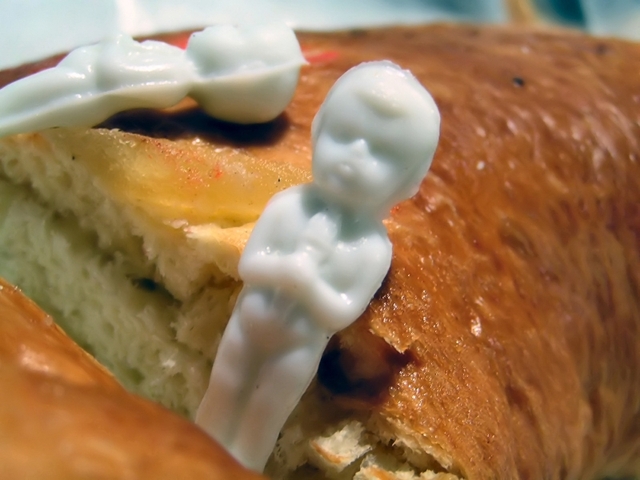 There’s a plastic baby in my rosca !!!!Â

One of my favorite things about having a rich cultural Mexican heritage is celebrating traditions and eating some of the best food in the world, like the rosca de reyes. I’m my house my mom tried to instill the history and tradition that came along with the rosca, but I never really paid attention because I was too busy trying to find the plastic baby before anyone else. I always knew as the bread with the baby inside and if you get the baby that means that you have to host the rosca party next year. When someone did get it, everyone would start laughing and poking fun at the person, but more than anything, I remembered that the rosca was one of the few times my family came together like a “real” family. Great food always brought us together. Course you can’t have rosca without champurado(mexican hot chocolate). Mmm….