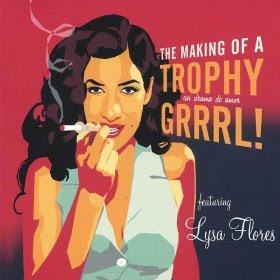 In other words this woman works non stop!


Having been involved in the Eastside scene, behind the scenes mostly, I was at many events where Flores would be performing at. BUT being the DJ dance music snob that I am, I barely paid much attention to her, or most anyone with a guitar on a stage. That’s just me. I’m a DJ, raver, so?

Nonetheless I would hear folks talk about how great she was and how cool she was. I would see her on stage and see a beautiful, powerful woman doing her thing, and her thing was beauty, passion, pain and rock. Cool. At the time I was splitting my time between the underground rave world and the Zapatista movement in the Eastside, where Flores would often perform at. I didn’t hang out with many of the Eastside activists because I also was at CSUN and had the academic activists to hang with, and after hanging with them all day, I didn’t necessarily want to go home and go out and talk more about (r)evolution. I would go and support and volunteer at events, but my fun and homies were in the DJ world. Often times when an event to raise money and awareness about the latest Zapatista need was over, I was hopping in my car and going to an underground, I wasn’t going to the after party with the Zapatistas at one of their houses. So I never got to officially meet Lysa Flores. I kind of remember shaking her hand a fund raising party I was DJing at my friend’s house.

The first time I saw her perform and paid attention was at the art show Vexing: Female Voices of East LA Punk. Flores was performing with Alice Bags, and Teresa Covarrubias of The Brat. Flores played a big part in assembling the show and performers since she grew up around these women’s stories and music. The curators, not being LA natives, were lucky to find Flores who was able to navigate the various histories, conflicts, chismes and broncas y pedos between that generation of musicians and artists. Flores influence was all over that space. She had her art work up and various memorabilia that really struck me. Alas I didn’t meet her that night either. Even though she looked super cute in a cowboy hat.

In May of 2010, at a friend’s wedding I finally got to meet the world famous Lysa Flores. She was very nice and liked to 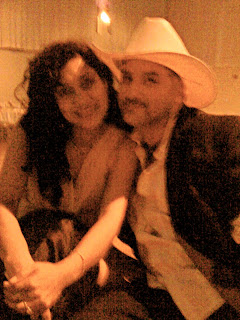 laugh. We danced a little bit and got a long rather well. We became good friends. I learned a lot about the Eastside scene that I had never heard about, and her stories about touring, films and such never ceased to fascinate me. She invited me to a series of shows she did around the city including Art Walk where she performed as a trio (w/ drummer Fredo Ortiz and various bass players) or just solo. In either case she was amazing. She has this presence that makes people stop and listen and when they hear her voice they know it is coming from somewhere real, experienced, and alive. She told me before one solo show how she didn’t feel like doing a solo show, but none of her musicians could make it. I expected her to be not as on point as when I heard her with others, but to my amazement, by herself she seemed even more powerful. She was playing inside a gallery. It was darkened and the door was closed to keep the noise level from the street to a minimum, but people walking by would hear her, stop, see her, and make their way in. She is a natural performer.

In November she was a part of an all Latina art show in Cairo, Egypt. The other artists were installation, conceptual, etc. she was the only music artist on the bill. She came back with lots of stories such as how Egypt sent 20,000 troops to Mexico in the 1860’s to help Mexico boot out Maximilano and none of those Egyptians returned. They all chose to stay in Mexico. They often thought she was Egyptian. It was the first all woman show to be had in Cairo. At one point the local government was about to stop the show, and only through the national government interceding were they allowed to proceed. Unfortunately video of her performing at the opening night gala (on a roof top no less!) and on the street having a one song-for-one song exchange between school children and herself were lost. 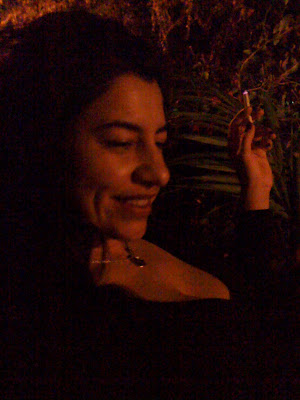 Currently Flores is getting ready for the release of a new album and two documentaries. If you follow the first link to her new site you can read more about what she has been doing and keep abreast of her upcoming work.